The name of a class in SystemVerilog declares its type, so that when an object is constructed from the class with new, the methods and members of the class then determine how the object interacts with other objects in the test environment. Even though 2 classes may be structurally the same, their compatibility will be determined by the type (class) name. In SystemVerilog, a sub-class can be declared that extends a super class. This means that the sub-class is a syb-type or specialisation and inherits the super class' methods and members as if they were declared in the sub-class itself.

Just using these ideas allows one to model the relationship between objects: For instance, given a declaration for a transaction, one may wish to sub-type the declaration and create a more specialised transaction for an application with a particular address map:

This general purpose transaction can be extended:

The sub-class (Mem_map_trans) can access fields and methods declared in the super (also referred to as base) class while adding the abstract control knob, area, to represent the address map. The base class can be repeatedly sub-typed, as can the sub-classes so that a class hierarchy can be developed with relationships that can be represented in a UML diagram. 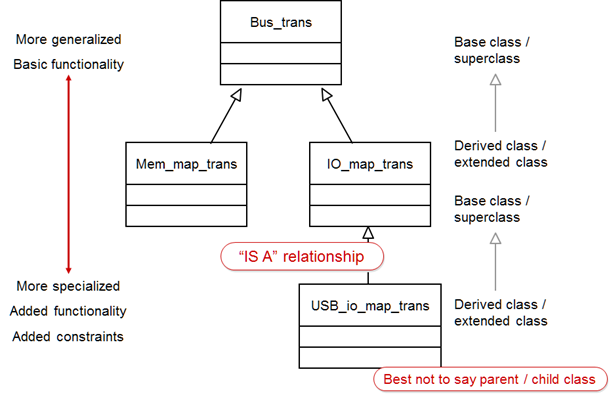 The point is that the general class declaration at the root of the hierarchy contains class member declarations for all the sub typed classes. As well as method declarations like print and copy. When developing a class hierarchy, one would like the root of the hierarchy to represent a blue-print for sub classes. We can have the concept of a transaction (the abstract, blue-print) and from that extend and build an actual transaction, for instance, the memory mapped transaction. The concept of an abstract class, declared in SystemVerilog as a virtual class, allows us to model this type of relationship. So we can just change the declaration for the transaction class:

And that would work. But to be useful, we need to know several features of an abstract class:

The virtual class can declare all the method types that can be used in a concrete class as well as data members, but can also declare a pure virtual method, which can only be declared in a virtual class.