Returning Transactions in Response to Requests from the Sequencer

UVM offers several ways in which a driver or monitor can return transactions (or other information) back upstream to a sequencer in response to requests from the sequencer. Each approach is applicable in different situations, so you need to understand the pros and cons of each to make the right decision in any given circumstance. The issues involved are complex and controversial: even the experts still debate which approach is best. 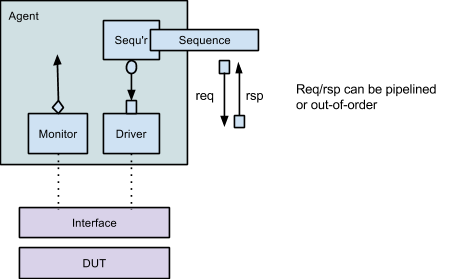 Here are the three approaches, stated in our recommended order of preference:

Layered protocols should be modeled using layered sequencers or layered agents, where transaction types appropriate to the individual protocols are used at each layer. Various approaches are possible, and the experts still debate which approach is best.

The two main approaches are to layer just the sequencers or to layer the agents. It may be appropriate to layer just the sequencers when it is possible to reuse the constituent parts of the original protocol agents and when the original agents were written in such a way that the sequencers can be used independently of the monitors (i.e. when sending a response from the driver back to the sequencer rather than using the path through the monitor to return a response). It may be appropriate to layer the agents when it is not possible to decompose the agents into their constituent parts and use the parts independently. When layering agents, it is generally necessary to use the factory to replace individual components within the agent wherever those individual components need to be modified or disabled. 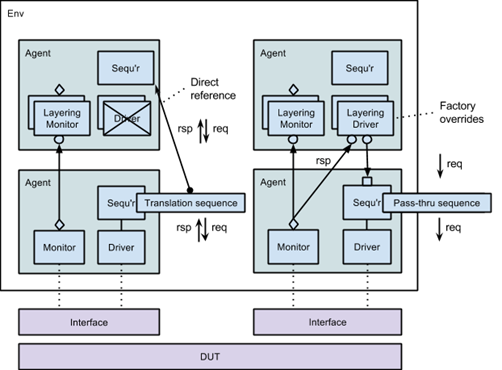 The layering driver approach is usually recommended in combination with explicit TLM port-export connections between the layers, whereas the translation sequence approach (whether layering sequencers or agents) is generally recommended in combination with direct references from the translation sequence to the higher layer sequencer, avoiding the necessity for TLM port-export connections.